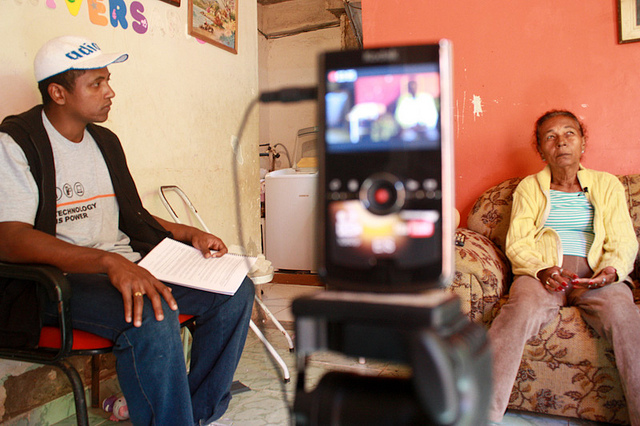 Voices of the Mission Series + Training in Brazil

June + July 2011 | WITNESS participated in a 3-day fact-finding mission with Brazilian human rights experts to investigate the communities facing forced evictions due to development for the World Cup 2014 and Olympics 2016. The mission was led by the Special Rapporteur on the Human Right to the City of the Plataforma Dhesca Brasil (a national human rights network).

During the mission, WITNESS’ Priscilla Neri filmed testimonies from residents facing eviction in Rio de Janeiro and produced a series of four short films, Voices of the Mission. The videos were screened at a special public hearing organized by the Office of the Federal Prosecutor’s working group on housing violations tied to the upcoming megaevents. In a blog post about the video series, Neri writes,

This working group can play an extremely important role in holding the government’s feet to the fire and demanding that the existing protections against forced evictions be upheld in the communities being targeted.  By using video to bring the voices of these community members into spaces like this hearing, our partners are helping make visible the abuses that are happening while putting a human face on the stories behind the report.  They’re also using strong firsthand testimony to counter the government’s version of events.

WITNESS also held an intensive 9-day training with 17 activists and advocates fighting megaevent related evictions in Rio de Janeiro, Brazil. During the training, participants developed campaign strategies for targeting municipal, federal and international decision makers and demand accountability and an end to forced evictions in Rio. Watch a video about the training here.