December 2013 | WITNESS and Amnesty International released the full Forced Evictions Advocacy Toolkit, a multimedia resource for activists, social movements and communities fighting evictions. From outlining the obligations of governments to sharing videos that help foster debate and inspire mobilization, the Toolkit provides critical resources to support the efforts of those advocating against forced evictions locally and globally, as well as those working to raise awareness. WITNESS is participating in ongoing conversations with partners in Brazil, Cambodia, Egypt, India, Italy and Mexico to determine how they will be able to effectively integrate the Forced Evictions Advocacy Toolkit into their work. All eight-language versions of the Forced Evictions Advocacy Toolkit are now available for download. Read more about the Toolkit on the WITNESS blog.

To maximize the impact and reach of the Evict Them! In 5 Easy Steps animation, one of of the Toolkit resources, WITNESS is continuing to do targeted distribution. By the end of November, over 25,000 people had watched the video in English on YouTube, and over 10,000 more views in other languages. On November 5th the animation was featured on Upworthy, and in only a day, the video received almost 14,000 views. The animation was also featured in the Daily DoGooder. Brazil 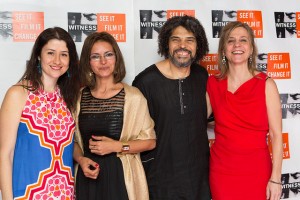 WITNESS’ forced evictions partners Antonieta Rodrigues Simões and Argemiro Almeida Ferreira traveled to New York for the 2013 Focus for Change Benefit. The activists used this opportunity to form new relationships with potential allies, and to build solidarity in meetings with groups such as ESCR-Net, NESRI, Take Back the Land, Human Rights Watch, and the Brazil Foundation. They also connected with a New York Times reporter at the Focus for Change Benefit, and met with representatives of the Permanent Mission of Brazil to the United Nations. For our most recent articles about Forced Evictions, visit the WITNESS Blog.