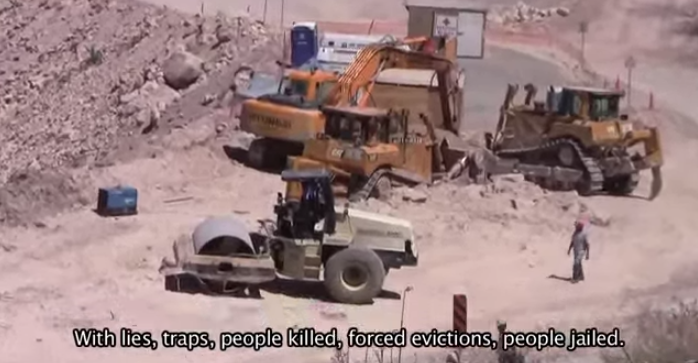 Success at the Permanent People’s Tribunal

November 2012 | WITNESS partners, Habitat International Coalition-Latin America (HIC-AL) and the Mexican Movement of Dam-Affected Peoples (MAPDER), celebrated some important victories at the Mexico chapter of the Permanent People’s Tribunal (PPT). During the opening of a special pre-hearing on dams, MAPDER screened a video to a panel of international experts serving as judges, and then used the video to frame broader national linkages between violations and provide an overarching view of the issue. In addition to the testimonies heard in the video, residents living near dam projects testified in front of the panel, sharing stories about the human rights violations they have endured.

The judges described the hearing as “deeply saddening and disturbing” and recognized that there has been a pattern of “gross and systematic human rights violations” in the construction of dams in Mexico over the past 40 years. After two days of testimony, the PPT judges issued a ruling, calling on Mexican authorities to end the forced evictions and comply with Mexican legislation and international human rights standards.

The video presented, ¿Como terminar una comunidad de 140 años en 15 días? (How to destroy a 140-year-old community in 15 days), was co-produced by WITNESS and features testimonies from dam-affected communities across the country as they speak about the common patterns of violations that take place before/during/after the construction of dams.

The video was also shown at a meeting with the Mexican Supreme Court in which community leaders and advocates shared the preliminary PPT ruling along with a list of requests.  Good progress was made as the Court agreed to work with our partners towards the creation of a national protocol for federal judges in order to provide guidance on how human rights frameworks should be considered in rulings on cases involving dam construction. Excerpts were also screened during press conferences held in Guadalajara and Mexico City to publicize the judges’ preliminary ruling.

According to our partners’ assessment, the issue of dams and human rights violations received an unprecedented amount of national media coverage in Mexico due to this effort (30+ national articles), including in outlets previously considered inaccessible or hostile. Communities’ demands were portrayed fairly positively in key outlets like La Jornada, IPS, El Universal and Milenio, and key inroads were made for future more in-depth coverage with outlets like CNN Mexico and Televisa.

Read more about the outcome of the Permanent People’s tribunal in this blog post.

Image: Still from How to destroy a 140-year-old community in 15 days