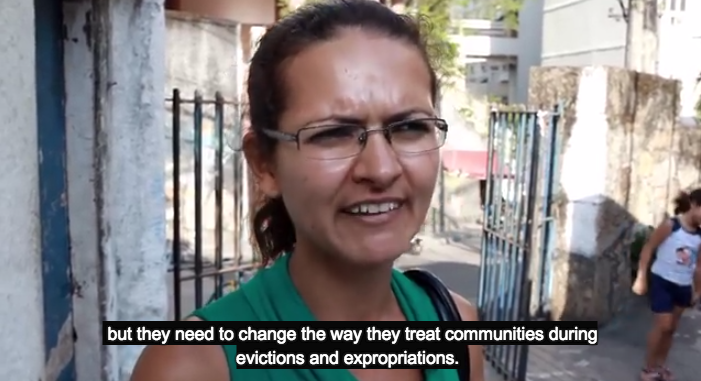 December 2011 | On December 10th, International Human Rights Day, a new report was released estimating that roughly 170,000 people in the 12 Brazilian host cities are at risk or have already been subjected to forced evictions due to the 2014 World Cup and 2016 Olympics. In this blog post, Priscila Neri describes how this report contradicts the story that government officials are offering,

The report provides a powerful counterpoint to the official narrative often repeated by local authorities and decision-makers, many of whom like to say that “nobody is being removed by force” and that “no families are being resettled without proper compensation.”

To further counter this narrative, WITNESS partners launched a new video documenting the attempts of local partners as they try to deliver a letter to the International Olympic Committee (IOC) in Rio. The video shows Antonieta, a 31-year-old single mother who was forcibly evicted, confronting a group of Olympics organizers to personally deliver a letter and DVD. The letter urges the IOC to take a stronger pro-human rights stand by condemning and taking action to stop the ongoing forced evictions. Even though the IOC declined to meet with the activists, the video garnered thousands of hits on social media and helped our partners initiate contact with national and international journalists.

Click “CC” to watch the video with English subtitles.