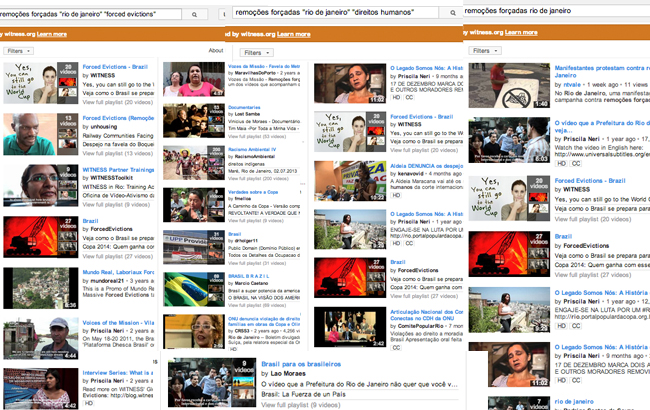 September 2013 | As officials in Brazil continue denying that forced evictions related to the 2014 World Cup and 2016 Olympics are taking place, WITNESS and our partners are finding creative ways to counter this blatantly untrue narrative.  Most recently, with our partners from the Comitê Popular Rio da Copa e Olimpíadas, we launched the Rio Forced Evictions Video Curation Project. The project aims to:

a) identify videos on forced evictions;
b) catalogue/verify/systematize according to violations reported;
c) extract the overarching narrative of forced evictions in Rio;
d) provide a direct counterpoint to the local government’s repeated denials that forced evictions are taking place.

The team spent 18 months finding videos and organizing them into a database, highlighting violations and testimonies, and then working with volunteer lawyers to correlate the specific abuses with existing legislation at the local, state, federal and international levels. The 114 videos that were examined elucidate common patterns of violations before, during, and after evictions, and the larger picture that emerged was detailed in a report outlining the main findings and recommendations.

A 3-minute compilation video was also produced to weave together the most powerful testimonies from the videos and serve as an invitation for people to explore the full report further. In the coming weeks, the report will be distributed to key authorities, including Rio mayor Eduardo Paes and state prosecutors, as well as shared through in-person screenings and debates in spaces like the Globale Rio Film Festival, the Ocupa Câmara protests, and others.

In the first few days since the launch, the report received significant traction online, and the video has 1000+ views and hundreds of shares on Facebook and other social media networks. Shortly after the launch we published a two-part blog post about the project, was then cross-posted by PBS’ MediaShift blog and highlighted by NewsMotion.